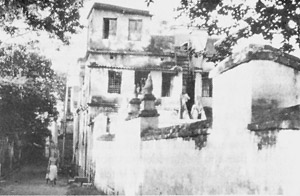 Sri Yukteswar about his life: “My family name was Priya Nath Karar. I was born here in Serampore, where Father was a wealthy businessman. He left me this ancestral mansion, now my hermitage. My formal schooling was little, I found it slow and shallow. In early manhood, I undertook the responsibilities of a householder, and have one daughter, now married. My middle life was blessed with the guidance of Lahiri Mahasaya. After my wife died, I joined the Swami Order and received the new name of Sri Yukteswar Giri. Such are my simple annals.”

Of his guru Paramahansa Yogananda said: “His every utterance was chiselled by wisdom. . . . The essence of truth, all-pervasive with even a physiological aspect, came from him like a fragrant exudation of the soul.. . . His feet were firm on the earth, his head in the haven of heaven.” “Sri Yukteswar fitted the Vedic definition of a man of God: ‘Softer than the flower, where kindness is concerned; stronger than the thunder, where principles are at stake.'”